I was reading a gripping blog in French called “Objets du ciel” (broken link) when I bumped into an amazing article written by Carl Conrad. I first thought that this post was unbelievable. I daresay that all the articles he writes are amazing. I am going to report hereafter what I have read about this topic – nuclear-powered aircraft – from different sources, but Carl Conrad’s article is the one that inspired me most. 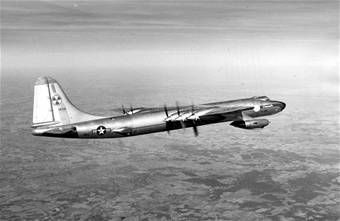 © Photo: National museum of the USAF

As a major oil crisis is looming, airlines are cancelling some less financially viable air links of theirs. The future of aviation as we currently know it, seems to be in jeopardy. Nothing seems to be used as a substitute for any current kind of energy, not even electricity. What about nuclear-powered engines?

Nowadays, nobody would bear any nuclear-powered test flights. However those tests did occur within a USAF-carried-out weapons system (WS 125-A) nuclear-powered bomber aircraft programme. Those tests were performed with a 1,000-kilowatt-nuclear jet engine airborne on a Convair NB-36H. This aircraft named “The Crusader”, took-off 47 times during the 50s. The engine was not used for propelling. It only worked at an altitude which was deemed sensible. Those tests allowed to assess the nuclear engine drive performance. Every flight would involve troops deployment in the area to prevent as soon as possible from any accident fallout spreading. The aircraft was modified in order to enhance the five crew member’s safety. The USAF considered the concept not realistic and gave the programme up in late 1956.

However, this technology might be coming back to fly some drones for long-lasting flights. People might be relunctant to see nuclear-powered drones taking-off and flying past over their heads. Who knows? Maybe some day.

Another project to mention: Project Orion should have become a 4,000-ton, long-range spacecraft powered by controlled nuclear pulses, or explosions. For this purpose, a small test vehicle was built. It was dubbed “Hot Rod”, and was conventional-explosive-powered craft. Finally, Orion was cancelled in 1965 because it would not have been politically correct and because of technical challenges.