He took off that day. It was 115 years ago, two years before the Wrights. Gustav Weisskopf had changed his name into Gustave Whitehead before building his aeroplane whose name was the « Condor », or number 21. Gustave was a German immigrant from Leutershausen in Bavaria, where a splendid museum https://www.weisskopf.de commemorates the feats of the brilliant inventor.

Two replicas of his plane #21 flew in 1986 in the U.S.A., and in 1997 in Germany. Several books have been written about Gustave Whitehead so far. Susan O’Dwyer Brinchman published the latest one last year. Her searching follows her father’s, Major William J. O’Dwyer, a retired U.S. Air Force Reserve officer who had found early Whitehead’s photos in an attic, in 1963, and researched Whitehead for the next 45 years, interviewing many witnesses. Susan worked with him during the later decades and recently, has found even more. She explains why Whitehead must have been the first in the world to perform a steerable, propelled without catapult, heavier-than-air flight. She shares an extensive FAQ and lots of resources on her website here: http://gustavewhitehead.info/gustave-whitehead-resources/  which are quite compelling. You can order her book Gustave Whitehead: First in Flight on Amazon or get a signed one by clicking on the cover here below: 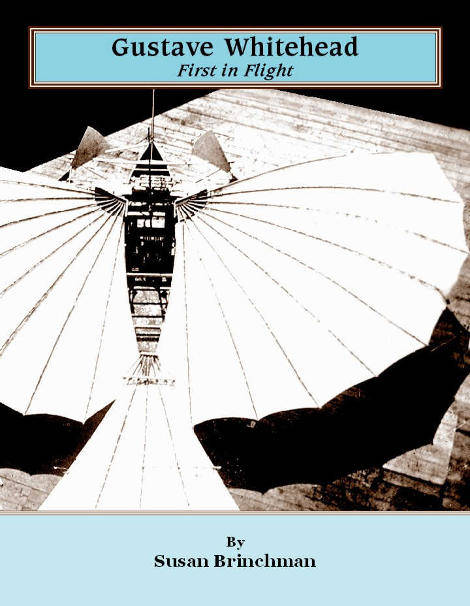 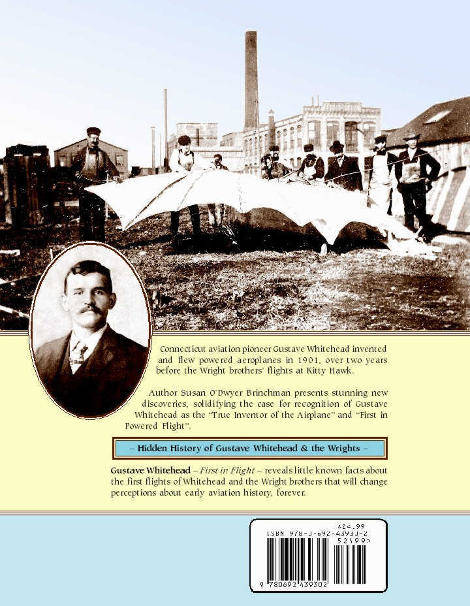